I don’t mean this irreverently, but I really think God is laughing at me. In January 2015, I wrote down a prayer request as I continued my art journey. I asked the Lord to “open doors to speak to more people.” Now, I most definitely did not mean “speak” literally. I’ve come a long way in my public-speaking comfort level, but I still battle terrible anxiety. I would much rather “speak” in the sense of the way a brushstroke speaks to the heart. In fact, I would most prefer for the art to stand alone and to not even be present when it is on display.

But, exactly one year after I wrote my prayer, yesterday in fact, God opened the door for me to literally speak to a church in Castle Rock, Colorado, about the Shine Like Stars exhibit which currently hangs in their gallery. Lo and behold, I did not pass out on stage; and the members of the congregation deeply encouraged me in the gallery afterwards. My “talk” was delivered in an interview format and addressed two primary questions:

What is the history of your involvement in Kenya and how did Sanctuary of Hope come to exist?

My husband and I traveled with our two biological sons to Kenya for the very first time in 2001 to adopt our third son, Jedd, age 15 months at the time. As we encountered the Mother Teresa orphanage where he and about 125 other residents found refuge, our hearts broke. But the slums surrounding the orphanage shocked us even more. Countless unaccompanied children played in open sewage, barefoot. When we returned home with our beloved son, we could not forget the children we left behind.

After that first trip, we served in Kenya with various short term mission teams and met the Karaus through mutual friends. At the time, Pastor and Mama were in their second decade of pastoring churches in Mathare Valley, the second largest slum in Nairobi. In Mathare Valley, somewhere around half a million people live in six square miles of abject poverty, lacking even basic services like electricity and sanitation. The Karaus intrigued us. They served in utterly desolation conditions, yet they radiated joy.

In 2004, we served at the Mother Teresa orphanage with a short term mission team; and we met a baby named Lily. In 2005, we split our family across the world to adopt her. My husband and our seven year-old son stayed home for work and school. My mom, father-in-law, and our two four-year-old sons traveled to Kenya. We expected the legal process to take 6-8 weeks. But our case entangled in various legal issues, and seven-and-a-half months later, I finally brought Lily home. It was a brutally challenging time, but Pastor and Mama Karau became our family. They carried us through.

In the context of this close relationship, near the end of Lily’s adoption, Mama Karau shared with me her heart to gather up ten or so of the orphans she saw daily, suffering in the slums. She longed to provide a home for them. What she described sounded so familiar to me. Hope’s Promise, our adoption agency, oversees similar homes around the world. So, when I returned home, I talked to Hope’s Promise. Within a very short time, the Karaus were hired as Kenya Country Coordinators and we commenced fund-raising to open a home. Less than a year later, in 2006, Sanctuary of Hope (SoH) #1 welcomed ten children home. Eventually I, too, went on staff with Hope’s Promise and served as Director of Orphan Care until 2012. Today, two SoH homes provide a family for twenty-four former orphans.

(This history is very condensed, as you can imagine. I’ve listed a table of contents below this entry of previous blog entries with more details.)

How did the Shine Like Stars collaboration of your work and the SoH kids’ paintings come to be?

This exhibit really flows from a lifetime longing to interweave the strands of art, faith in Jesus, and justice. It’s a dream come true as God opened the way, as only He can, for me to display pieces I’ve created over the years about orphan issues alongside the work of the SoH kids, who are so very dear to me and my family.

Shine Like Stars began last spring when an artist friend, Penny Taylor, and I set out to develop a project for the SoH kids that would be simple to complete but allow for the unique expression of each child. Our original intention was to auction the paintings as a fundraiser for SoH in summer 2016. Penny traced star shapes onto gessoed canvas, and we sent them over to Kenya in another friend’s suitcase (my dear friend and Pamba Toto business partner, Debbie Lee). Debbie brought back 24 glorious masterpieces, as well as the collaborative star painting.

Then the Colorado Springs-based art group, Flourish, invited me to install a gallery this past fall.

Through the years, I developed a body of artwork about my experiences with orphans around the world. I longed to share my dual passion for orphans who are still suffering and for the solution of Hope’s Promise family-style homes. Collaborating my work with the SoH stars emerged as a natural fusion.

When Shine Like Stars opened in Colorado Springs, God answered every prayer for the exhibit, even a secret prayer I shared with no one. I asked Him to provide another gallery for the exhibit after the Flourish show closed. That night, Pastor Paul Lessard of Castle Oaks Covenant Church asked if Shine Like Stars could be re-located to the church gallery in January!

As you view and ponder Shine Like Stars, my greatest hope is that statistics will become people.

153 million orphans in the world is an impossible number to wrap our brains around. It’s hard to feel moved to help the masses because it is simply too overwhelming. But at least one of those orphans becomes a real person when you view a star painted by David, for example. You can focus on his situation as a four year old child left alone for the night in the slum as his mom went off on another drinking binge. You can see him in your imagination, rummaging through the neighbor’s trash for something to eat. Then, you can celebrate his homecoming to SoH. You can rejoice that his future now shines as bright as the colors he chose to paint his star, and you might even feel compelled to personally invest in his life.

The phrase “Shine Like Stars” is lifted from 1 Corinthians 2, a passage that talks about shining like stars as children of God. The crazy thing I’ve discovered in my journey of loving orphans and painting about orphan issues is this: when we help an orphan shine, we find our own lives flooded with light. 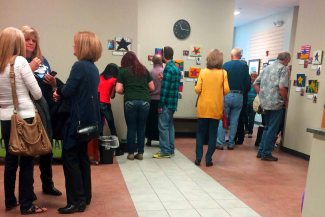 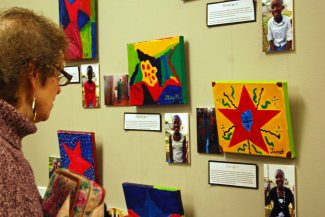 Special thanks to my super special kids who modeled for some of my artwork in the exhbit, and who took photographs in the gallery while I visited with people!

Table of contents of blog entries about our journey in Kenya through both adoptions and with SoH:

Waiting for an Adopted Child to Come Home

Offering, Pondering the Lives of the Mother Teresa Sisters

A Most Unexpected Day in Kenya (during Lily’s adoption)

A Scary Night in Kenya

Just to Touch the Hem

Carried, A Moment in Lily’s Adoption

A Scary Day in Kenya

Kindness in Kenya (during Lily’s adoption)

Each One Small and Beautiful

Of Loss and Hope

Let It Be Me

Full Circle Hope – A Story About Sanctuary of Hope

A Tale of Two Drowning Kids

Every Child a Priceless Gift

One of the Best Days of My Life

Leaving A Job I have Loved, but Not the Passion

Orphans Around the World

Raising Kids through the Challenges and Miracles of Adoption

The Battle for An Orphan’s Heart

This One is Mine

The Mystery of Christmas