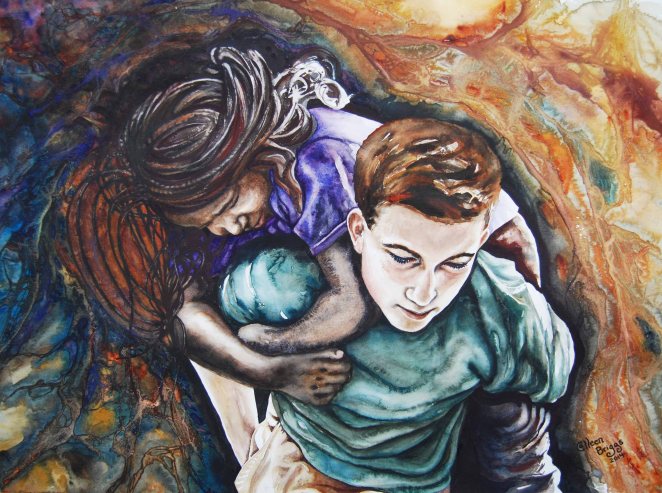 On Saturday, I received an urgent appeal for prayer. A friend with colleagues in Nigeria forwarded a prayer request from Bible translators working in the African country. The insurgent group Boko Haram poised like a python above Michika, a large, mostly Christian market town near the border of Cameroon, ready to strike in their march to establish an Islamic state in northeast Nigeria. Last April, Boko Haram abducted 200 school girls, an incident that sparked international outrage. I began to pray.

On Sunday I received horrifying news that the insurgents struck in the early hours of the morning, destroying churches and killing all in their path. The Nigerian army fled, leaving the people defenseless to hide in surrounding hills or face slaughter or abduction. A large Catholic church in Bazza, a nearby town, was completely destroyed.

I don’t know anyone personally who survived this horrific event, but I will tell you what I see in my mind’s eye:  the hollow eyes of children, peering from behind bushes. They tremble as night encroaches, in utter shock at witnessing the murder of their parents, siblings, and community. It is always the children who suffer the deepest nightmare of adult conflicts. Lacking development of any coping mechanisms, they bear the full brunt of emotional, mental, and physical anguish.

As I imagine these children in Nigeria, I am taken back in my memories to 2008, to the sobering fall-out of an adult conflict – an Internally Displaced People refugee camp in Nairobi, settled after post-election violence.

We climb out of the matatu (van) into a bright equatorial morning. The road is rutted and muddy. Children swarm, chattering and giggling like normal kids; but they are not. Ill-fitting, mismatched garments cannot hide the ravages of hunger and disease. Infections ooze from noses and eyes. But even desperate circumstances cannot extinguish the natural curiosity of children. They stroke our arms, caress our hair, and gaze inquisitively into our strangely light-colored eyes.

My dear Kenyan friend, Mama Karau, points out a little boy in a bright red sweater, Simon. His dimples flash, belying the dire need that characterizes his daily existence in an Internally Displaced People Camp near Mathare Valley, Nairobi’s second largest slum. Hundreds of refugees from Kenya’s recent election violence, mostly old women and young children, remain unable to return to their homes in Mathare Valley, their shacks destroyed by members of other tribes, often neighbors, or now occupied by others who refuse to leave. Over 1000 people died in the political eruptions of late 2007/early 2008, and more than half a million were displaced. Many have returned home now that Kenya is stabilized; but as of late July, more than 50,000 internal refugees remain in 89 camps throughout Kenya. Mama Karau tells me that Simon is one of the children being considered for Sanctuary of Hope (SoH) #2.

She leads us along narrow corridors between stark gray World Vision tents. Women look up from washing dishes and clothes to eye this group of foreigners gingerly stepping around campfires and wash basins. We observe a goat shackled to a tent peg. Mama explains that the owner had many goats in Mathare Valley. She could grab only this one, just born, as she fled the chaos and violence. 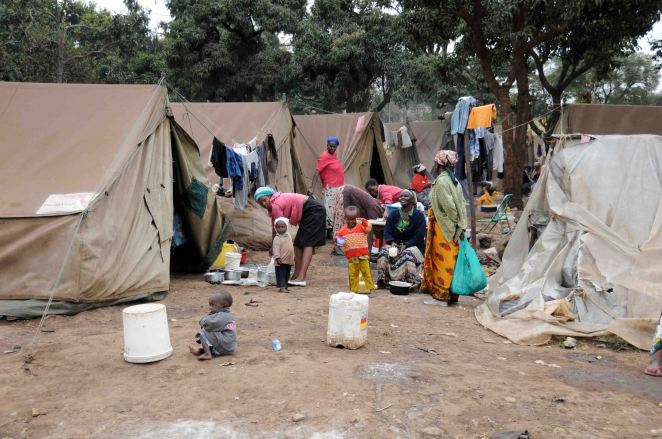 I fall behind the group as I utilize my very limited Swahili to learn some names. By the time I catch up, the rest of the group has moved on from Simon’s grandmother’s tent.

Simon’s grandmother ducks before me into the dim interior of the tent, and replies “Karibu.”

Simon and Grandma in IDP camp, 2008. Photo by Melissa Lemke/Sievers.

I greet her in Swahili, but she doesn’t realize this is the extent of my language ability. She holds my hand and earnestly laments in Swahili. Her emotion is too raw for me to interrupt her to clarify; and besides, sometimes the eyes say more than words ever could. I nod sympathetically, hoping to ask Mama Karau for the story later. I want to say something that will comfort her, but words fall weightless against such suffering. I back out of the tent, heavy with longing to do or say something to bring her relief. Children grab my hands, pulling me along through the dust and mud. I glance back; she is following. I stop and wait for her.

It is all I know to give her. She nods. I grasp her weathered hands in both of mine, and she bows her head. I pour out my heart to God in English, not knowing if she will understand any of it, standing in that seemingly god-forsaken place. I cry out to Him to keep His promises, “Blessed are the poor, for theirs is the Kingdom of God. Blessed are those who mourn, for they shall be comforted.” Feeling I have given her so little, and yet poured out all I have, I meet her eyes, press her hands, and keep walking.

As we pull away from the camp, Mama looks back at me from the front seat. Her searching gaze speaks volumes.

I shake my head and look away, “God have mercy,” is all I can say.

Simon, 2012, after four years as a precious SoH child.

When Simon eventually came home to SoH #2 about a month later, he remarked in wonder upon seeing his new bunk bed draped with a mosquito net, “No rats will be biting me tonight!”

Yesterday I joined some fifty friends in praying and fasting for SoH. As hunger pangs kept me company through the day, I thought of the SoH children before they came home. And I also thought of the children in Nigeria, hiding near their destroyed homes of Michika, lost, alone, and terribly hungry at this very moment.

I fell asleep with an unquenchable ache in my bones and in my heart.

14 thoughts on “Whatever It Takes”