Sophia is dying. Skin and bones hover in uneasy truce between life and death; neither demand dominion for the time being. Her bed is her closest ally. Waking or sleeping, she has not left its confines for three weeks.

We crowd into the compact, murky space. Ruth settles on the bed next to Sophia. They are lifelong friends, thirty year old age-mates. In their early school days, Ruth aspired to emulate Sophia, who consistently ranked number one academically. As they grew in the impoverished desperation of East Africa’s second largest slum, who knows the oppression they faced? Their paths divided, and Sophia contracted AIDS.

Ruth escaped Mathare. She married a man with a government job and returns as a volunteer counselor for the Mathare Worship Center VCT (Voluntary Counseling & Testing) HIV clinic. After serving at the church, she buys food at a nearby market for Sophia with the money she would have used for transport home. She twists her way deep into the slum to the bedside of her old friend. Ruth bathes Sophia, tends to her bed sores, helps her eat, gives her the clothes off her back. Then she walks nine miles home.

I stand in the door frame of Sophia’s dim one-room home, propping the door open with my foot. Ruth supports Sophia in a sitting position, and gingerly lifts to her lips a cup of fresh mango juice that we have brought. Equatorial light filters through the doorway, bathing the contours of Sophia’s face in a golden glow.

In the shadows, three of my friends begin to sing. Their voices blend and soar, battling unfathomable suffering and hopelessness with ethereal harmony. Tears pound behind my eyes, stream down my face.

How deep the Father’s love for us,

How vast beyond all measure

That He should give His only Son

And make a wretch His treasure.

Sophia’s gaze locks on mine as the women bridge to “Jesus loves me.” I see not sallow skin hanging from a stranger, but a treasure of immeasurable worth, buried deep in Mathare. Looking her straight in the eyes, I change the last word to “you” – “Jesus loves you.” My throat is so tight I can only mouth the words. She basks in the melody, transported, peaceful.

The Kingdom of God tumbles inexplicably into the darkness. It is as if the King Himself couldn’t bear to stand apart from Sophia, and suddenly crowds the room. I want to linger in this sacred space forever, but Sophia is weary.

Quietly we slip back into the harsh light, the stinging putrid smells, the colossal disaster of Mathare Valley.

Before spending time in Kenya, I personally knew no one infected with the HIV virus. Statistics were abstract.  It was easy to de-humanize the masses, to distance myself from a global crisis.

Then I met sweet little Sarah in a Nairobi orphanage in 2004. Just two years old, her body withered in the battle with HIV.  More disturbing, her soul decayed from stigmatization. Another orphanage neglected and ostracized her, and sent her to a Mother Teresa home to die. Perhaps she was born infected, or perhaps her HIV+ mother was forced to choose the desperate route of feeding her breast milk instead of watching her die of starvation.

Some students and I, participating in the InterVarsity Global Project to Kenya, took her to a hospital for treatment and stayed with her as surrogate parents for several days. Slowly we won her over and convinced her to receive love. Those first smiles flitting across her face on day two are amongst my life’s greatest treasures. Sarah died a month after I left Kenya.

Preventing and treating AIDS, I am discovering, is anything but simple. When babies are infected by breast milk, young girls contract HIV from men who believe the myth that having sex with a virgin will cure their own illness, and women of all ages must prostitute themselves to feed their children, the roots of the illness are extremely complex. In Kenya, where the government-subsidizes anti-retroviral medications, treatment is no less complicated. The life-prolonging drugs must be taken with food. In severely impoverished slums like Mathare Valley, sustenance is scarce.

Safe in my middle-class American neighborhood from the daily affront of skeletal AIDS-sufferers, may I never forget that behind every number lingers a face, and a human being with a story – a brilliant woman beaten down by slum desperation like Sophia, or an innocent child cast aside like Sarah.

I can’t forget what I have seen. I want to do more for these people. Although it isn’t much, I have discovered that one thing I can do is design necklaces for special projects to be made by women involved in Mathare Worship Centre’s Taraja group. Mama Karau founded the group in 2004 as a training and empowerment support group for HIV+  single mothers. My friend Debbie Lee and I co-founded Pamba Toto in 2006 to raise money for Sanctuary of Hope, homes for orphans in Kenya, and we are proud to carry Taraja products. In 2009, a marathon organizer commissioned Taraja through Pamba Toto to make necklaces for participants. I stumbled into great personal delight in working on designs for this project.

This past year, Urbana, the largest college missions conference in the US, commissioned Taraja through Pamba Toto to make products to sell at the conference. Much like the day I described in a previous blog entry, One of the Best Days of My Life, my heart blazed with joy as I knelt in the humble Taraja workroom, teaching women how to make necklaces for the event.

Check out Taraja Urbana necklaces if you are interested in buying one. (FYI – I don’t receive any personal income from the sale of Taraja products. Debbie and I pay the women a fair wage and profits are donated to Hope’s Promise for Sanctuary of Hope.)

Working on “Urbana necklaces” with Taraja 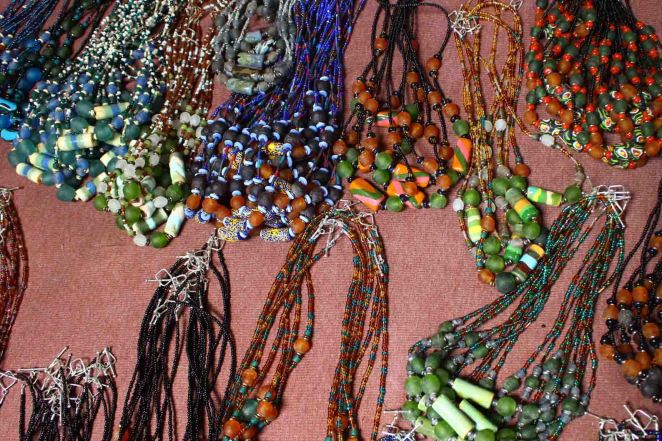 Since I left my job in orphan care in 2012 to focus on issues at home, I fumble along, sifting through experiences and memories, my heart at once broken and soaring with love for the people I am privileged to know and love in Kenya.

I flounder in this season of waiting and watching, trusting that somehow God will show me what it is all about, why a place and faces so far away haunt my thoughts and prayers daily…

My friend and Pamba Toto co-founder, Debbie Lee, with children in Mathare Valley.

6 thoughts on “Faces of AIDS – when statistics become people”