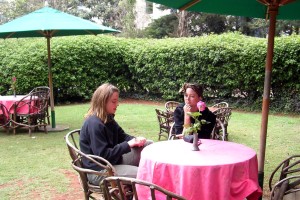 Amani ya Juu (Swahili for “peace from above”):  an enchanted garden engulfing my senses in tangible peace, healing my soul. Birds sing as vibrant green dance with breezes; and hope sprouts as surely as beautiful textiles leap from skillful hands. Amana Ya Juu, neslted in a Nairobi side street, waited for me like the tender presence of someone I felt I’d known forever. With a playground for children and batik-draped tables posted as invitations for lingering, it was one of my favorite destinations during our extended 2005 sojourn while adopting my daughter. 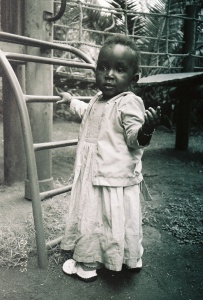 Its open gates lifted a friendly welcoming wave for our first visit. Feeling immediately at home, I eagerly soaked up stories of the founders:  refugee women alone and afraid in a new country, banding together to ward off hunger and poverty with the work of their hands. Now a large airy building with space for 200 artisans rises over the humble foundation laid by three founders. Walking towards the main workspace, artisans under tree canopies stamp fabric with wax, lower into vats of dye, lift in vibrant celebration. Once inside, hum of sewing machines tapers into silence when guests enter. Workers set aside their creations and gather to greet and sing, their songs like a battle cry against desperate circumstances held at bay by this magical place.

My other favorite place in Nairobi could not be more different. There, social evils of abuse and deprivation sprout like a dense invisible jungle, a canopy of desperation holding its hostages without ransom. Devoid of playgrounds for children, scraps of garbage provide entertainment. Bits of wire twisted together and plastic sacks bound by string into balls morph into toys, and children splash in the river where dead pigs float. But there, in East Africa’s second largest slum called Mathare Valley, Pastor and Mama Karau gather women as well to come, and to hope. Mama founded a support group of HIV+ single mothers to sew, create, and push back at the darkness through creativity at the church she and Pastor pioneered, Mathare Worship Centre (MWC). At the time, the workroom was a tiny cement-walled room buried in the heart of a roughly-constructed building. Light filtered through a rustic wood-framed door, ushered down a narrow cement-block hallway from an open balcony at the end that beseeched the light to glance off corrugated metal roofs below. Here, only the imagination provided garden foliage. Indeed, creativity grew and flourished, flowered and sheltered. Here I witnessed that human creativity is greater than the most pervasive gray, stronger than cement blocks, possessing the power to burst the bonds of poverty and press into irrepressible hope.

Mathare Valley children at the river

I dreamed of merging these variant worlds. I told Mama Karau about Amani ya Juu and asked her to meet me there one day. Relaxing at those batik-draped tables while my children played, we talked about what a miracle it would be if one of the Mathare Valley women could receive an internship.

The seeds of our dream pressed through the soil into a fragile seedling when Amani ya Juu granted an internship to Joyce, a woman I knew from MWC. Joyce knows all too well the struggles of slum subsistence. She understands the agonies of abuse and abandonment. She knows the heartache of a broken marriage and the desperation of single-parenting.

Joyce with some of her creations at Mathare Worship Centre, 2005

Joyce, with a bag created by Tuungane Pamoja, 2015.

She also recognizes the sliver of hope and dignity that breaks through like insistent dawn when a woman learns skills and becomes empowered to earn a living. At one of her lowest points, soon after her marriage dissolved, Joyce met Pastor Karau. He invited her to church, and she joined the women’s support group lead by Mama Karau. The tender seedling from Mama’s and my dream-talk in the Amany ya Juu garden grew into a sturdy stalk:  after Joyce completed her four year internship, she was hired full-time, specializing in quality control. She is currently cross-training to be the Head of Product Development.

She also dreams of planting a new garden for other women still floundering in the harsh rock-fields of Mathare Valley. Last year, she linked arms with four other women:  Alexsandra, Anne, Jane, and Enna. Between them, they are mothers to 12 children. Joyce joyfully shares her skills with these women though the artisan group she founded, Tuungane Pamoja (Swahili for “Let us join together”), whose products are sold through Pamba Toto in the US. She longs for her friends’ children to be able to attend school and for the families to be able to move out of the slum. Most of all, she wants them to know they are in this together.

I admire these hardy blossoms, and I am proud to stand with them.

One thought on “Dreaming of Gardens”