When A Life Catches Fire 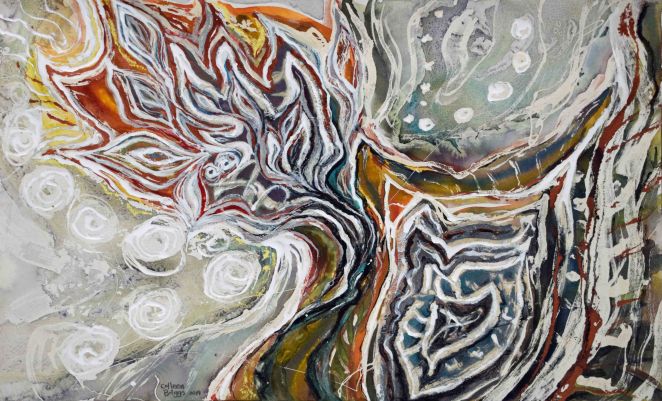 (c) 2019, art and excerpts from Come After Me, fiction manuscript, by Colleen Briggs.

Chinook winds howled down the tree-lined streets. Branches overhead tussled and cracked. Halfway down the next block, a limb crashed to the ground. She tugged her hat tighter over her ears.

After wandering for a while, she stopped to admire the architecture of an old church, tracing its outline to the peak of the bell tower. She noted a side door and wondered if it was locked. The knob turned, and she slipped inside, grateful for the respite from the tumultuous wind.

She found herself standing in an entryway draped with ornate, richly colored tapestries. Voices reverberated from a room down the hall, but in front of her, beyond a wall of interior windows and a wide archway, stretched the nave, deserted and dimly lit. As she strolled down the marble-tiled side aisle to the transept, every movement echoed in the cavernous room.

A shaft of artificial light fell through a massive stained-glass window, scattering color fragments across the front pews. She settled a green velvet cushion, trailing her hand across the intricately carved wood of the pew in front.

At least no one can sneak up on me with the acoustics of this place. Even trace sounds of shifting on the seat magnified, so she sat as still as possible. She startled at a metallic, clanking noise, but soon identified it as water chugging through old pipes.

Then a muffled rushing whoosh intensified and faded. What is that? She held her breath and listened. It had to be the wind whipping around the exterior of the stone walls. Although she could easily imagine it instead as the gathered voices of centuries, as the collected groans of generations of humanity longing for something more than the material world surrounding her.

She closed her eyes. She recalled going to church with her dad as a kid and how she always left the services with a desire to be a better person. But this church, on this night, impacted her in a vastly different way. The meditative sanctuary with soaring ceilings seemed to invite her to expansiveness. It intensified her yearning to press beyond the boundaries of “being good.”

The pew creaked as she leaned back and opened her eyes again. She wished she could see into the night sky above, but brilliant murals covered the arched ceilings. The paintings strangely frustrated her. As if the work of human hands could satisfy a reaching soul.

For just a moment she felt part of the groaning, merging into something bigger and more powerful than the present moment. But not even in her imagination could she get beyond that ceiling.

She saw Will’s face in her mind. If only that mystifying energy that had pulsed through her to Will could reach into her own heart, she thought, it might propel her out into the universe.

She had stepped into the walk with Kyle heavy on her mind. A choice loomed: cut off the relationship, or forgive and reconcile?

There, in that sacred space and remembering her experiences with Will, she wondered if there might be a third option. Something beyond human quandaries and solutions. But it taunted her, just out of reach, just out of sight. Beyond the ceiling. An unattainable path for those limited to walking, accessible only to those with wings.

And she still couldn’t figure out how to fly.

A rush of anger turned inward. I am absolutely crazy for thinking these thoughts.

She surged to her feet and didn’t even care how noisily her footsteps pounded as she hurried back to the door and allowed the wind to slam it shut behind her.

But a vague ache haunted as she made her way home under the tossing trees.

Soon after, Cassie’s breathing slowed and deepened. Talia lay there, wishing sleep would claim her as well. Giving up, she switched on her head lamp, glancing at the other bed. Not a stir.

The time had arrived to follow Mama Kabucho’s directive.

She slipped her hand under the net, slid the nightstand drawer open, and extracted a Gideon Bible. She had discovered it there the night of their arrival when she had tucked other items beside it.

In the aftermath of the evening’s trauma, she felt oddly and inexplicably as though shattered fragments of her being were falling into place, as if fossilized fissures were softening, raw and tender again. She recalled the yearning she had wrestled during the stormy night at the church. It swelled, merging into her awareness of “the Presence” she had sensed as Justin held her, barely an hour ago, and pulsated into longing for it to never leave.

Scenes and faces flickered through her mind: Will, Joyce’s shack, Sr. Kathryn, Moses, Hannah, Justin at Mother Teresa’s, and Mama’ Kabucho’s prayer for her. Could the book help her discover the commonality tying all these people and experiences together into what she most craved but didn’t know how to find?

She flipped to the table of contents and located the Gospel of John. As she read, phrases rolled over her like poetry: true Light, a voice calling out in the wilderness, the Lamb of God. Intrigued, she lost herself in the account of Jesus, a strange man who performed miracles and described the state of the soul in concrete terms like wind, water, and seeds.

But what perplexed her most was who he spent time with—those most despised by the religious citizens of his day. He went after the down-and-out, the weak and vulnerable, the sinners.

She had always assumed the Bible to be a catalog of behaviors to earn or lose favor with God. The Ten Commandments had often been subject matter for those childhood Sunday School flannel boards. But this man, Jesus, stirred up the ire of the “good folk,” especially the religious law-abiding leaders, and didn’t seem overly concerned about obeying the rules. In fact, he kept getting in trouble for seeking out “sinners.”

He seemed remarkably human—walking around, turning water into wine, weeping at funerals, eating with friends. Yet he also seemed so other-worldly—He looked straight through people to their inner motives.

And, He claimed that if someone knew him, it was the same as knowing God.

When she read the words, “Greater love has no one than this, that one lay down his life for his friends,” she felt an echo of that dynamic current of tenderness sweeping through her to Will. She visualized Justin feeding the little guy at the orphanage.

And with instant clarity, she suspected that if Jesus were to walk the earth again, He would look a lot like that.

And, Justin. He’d come after and stayed with her, present through her darkest hour… She suddenly perceived clearly—he had been a representation, a parable, of Jesus.

“When are you gonna let someone come after you?” he’d asked.

Justin had come after her. And he’d brought the Presence of Jesus to her.

She finished reading the Gospel sometime in the deep watches of the night with no concept of how many hours had passed. She mulled over this narrative of a God who sought out the last and least—who didn’t just talk about laying down his life for his friends to rescue them, but did it. And, more than that, according to the Book of John, rose again.

If the story was true, it changed everything.

No longer could the ceiling of the chapel hold her down in her own inadequacy. No longer would her efforts to “be good” peck ineffectually at the stubborn roof. She hadn’t even known it, but someone had come after her two thousand years ago. And still wanted her near. There existed a way through the barriers, created by this Jesus. He was busting open the roof and offering her brilliant new feathers to fly into a limitless sky, into a sweeping flight of following Him.

Her heart danced like a scorched desert surprised by a sudden rain. Her soul, like parched canyons and dusty riverbeds, reached for the tender moisture, absorbed it, and streamed with hope.