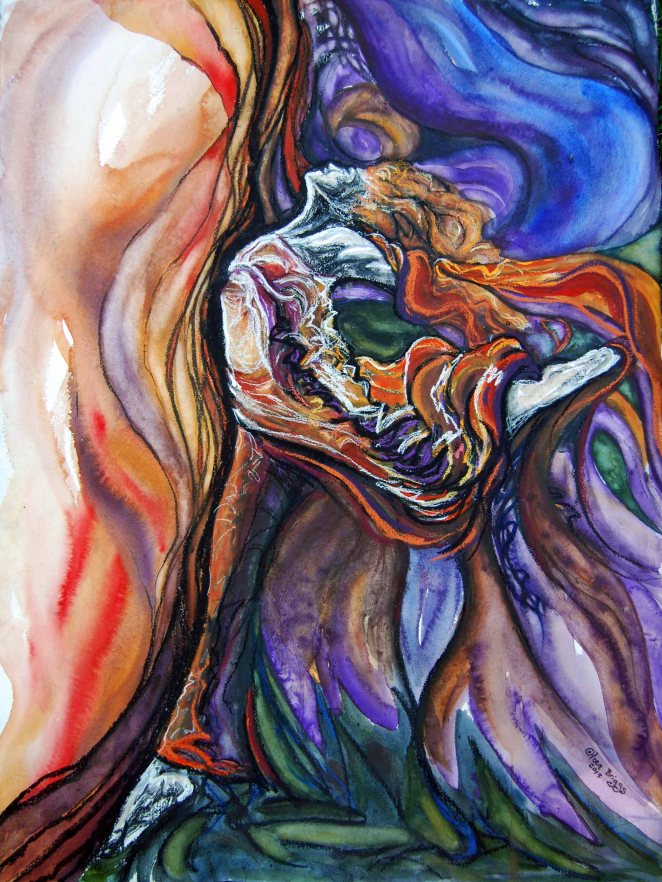 Truly he was alive in a way that few attain. Many aspire, but only sweat, tears, and blood yield this type of alive-ness. It wasn’t his choice to lay it all down at the feet of suffering. But he did choose, by the grace of God, to keep living.

When I was “stuck” in Kenya, he sent me this quote. He’d carried it in his wallet for forty years:

“It is not the critic who counts, not the man who points out how the strong man stumbled or where the doer of deeds could have done better. The credit belongs to the man who is actually in the arena, whose face is marred by dust and sweat and blood; who strives valiantly; who errs and come short again; who knows the great enthusiasm, the great devotions, and spends himself in a worthy cause; who at the best knows in the end the triumph of high achievements; and who, if he fails, at least fails while daring greatly; so that his place shall never be with those cold and timid souls who know neither victory or defeat.”  Teddy Roosevelt

He was 54-years-old in 2001 when he prayed during a church service that God would help him surrender his entire being to God’s purposes. He never imagined what would follow. Soon after, a severe stroke staggered him to the core, rendering him paralyzed on the left side. Slowly he learned to walk again, but never regained the use of his left arm and hand. Forced to retire from a decades-long career in electric engineering and to re-acquaint himself with recalcitrant limbs and a stumbling mind, still he chose life.

Always fascinated with American Indians, after his stroke he pursued new friendships and ministry with a group of Lakota Indians. There was little he could do to serve physically, but he could ride in a truck and keep a brother company as they delivered much-needed goods to Indian reservations and visited home-bound elderly.

In 2008, he wrote to me, “As I choose to look at blessings in (the way of Lakota wisdom), I realize that my stroke and the painful problems that are a result of it are ‘not all bad’ as they say. For through them God has opened my eyes and my heart to a world of blessings that I probably would have otherwise missed in my journey through this life, such as deeper understanding and compassion for disabled people, the power of God’s grace which can truly uphold us through anything, the depth of love that my family has shown me, and the good friends I have made during this time, especially my great therapists and my Lakota brothers and sisters.”

He couldn’t type anymore, with one hand limp; but he often hunted and pecked epistles of encouragement to his family:  tips to grandsons to improve their baseball skills, insightful questions in response to grandchildren’s research papers, reflections on history as he lived through it, assurances of God’s steadfast love. Together, he and I clung to this hope that he succinctly summarized, “God is in control and someday all will be ok. We know, because we have read the ending in the book.”

In 2011, I interviewed him for an article about Sanctuary of Hope (SoH). For my project, I quoted him anonymously; and he would never have wanted recognition. But Mom and Dad are woven into the foundational fabric of SoH in so many ways. During one of my favorite days with them, he and my mom sat with us around our dining room table, preparing the first round of fundraising letters to friends and family to launch our dream of opening a home for orphans in Kenya. With a young grandchild stabilizing the piece of paper, he addressed envelopes. For my interview, I asked him how he had experienced God through his involvement with SoH. He wrote, “An act of faith results in more faith. Deep satisfaction comes from knowing ‘I did something’ about sad issues that bother our hearts. We can say, ‘Today, God enabled us to help a child in need. What did you do today?’ Someday, like Jesus did, we’ll be able to say that ‘Lord, we finished the work that you gave us to do.’”

All along, he never stopped praying and hoping that God would heal him. The constant indignities of his disabilities taunted him mercilessly and led to further injuries as he often fell and suffered side-effects from medicines. In the month before he died, he asked if we could come to a healing prayer service with a woman from his church. Healing never came, this side of eternity.

A few weeks before he died, ten years after his stroke, he sent me a link to Johnny Cash’s song “Help Me” that revealed the exacting cost of his arduous journey.

From your golden throne

I need to feel the touch

Of your tender hand.

Release these chains of darkness.

Just where I fit into your master plan.”

He couldn’t see it then, but I believe that now all revelation is his. Even as he faded away, he taught me how to live.

At his memorial service, his Lakota brothers sang and danced in his honor. They presented an eagle feather to his widow. An eagle feather is the highest honor that can be awarded within the American Indian culture. A website that describes the meaning of receiving an eagle feather says they “were awarded to Indian Braves, warriors, and Chieftains for extreme acts of valor and bravery.” “The eagle,” it says, “flies higher and sees better than any other bird.”

Being alive, he taught me, is seeing and living for a reality far beyond what is visible.