A Beautiful River in Uganda

As most passengers triumphantly hoisted luggage off the belt, my mom and I watched and waited. Finally with a few lonely bags circling round and round in the increasingly vacated baggage claim, we acknowledged the obvious and filtered over to the airline desk to file our claim.

Undaunted, we woke the next morning to the sounds of Africa that I love – roosters crowing, vehicles hooting, children singing. Brilliant equatorial sunshine streamed through the window. Preparing for the day was simple, with access only to what we wore on our backs and what we strategically packed in our carry-ons. My mom and I laughed together at our predicament. Meetings with lawyers were on the docket for the day, and we hoped they would forgive our dismal appearance of rumpled jeans and t-shirts. At least we were in it together.

Our luggage arrived three days later, except for one bag. Mercifully it contained a collection of donations that were meant to stay in-country anyway. Really our luggage situation was minimal in contrast to the struggle all around us, compared to the issues we were commissioned to address. I planned originally to travel with the Executive Director of the adoption/orphan care agency for which I worked at the time. Our objective:  to investigate the international adoption process in Kenya. At the last minute, the Director was unable to go. My mom stepped into the gap as my traveling companion.

In 2007, insecurity plagued Nairobi, much of it associated with the “Mungiki” – a religious sect that values a return to indigenous African traditions and sub-divides into violent gang cells. The Mungiki terrorized Nairobi, particularly Mathare Valley slum and the matatu industry (privately owned public transportation). Not long before our visit, Kenyan security forces stormed Mathare Valley slum, where our friends the Karaus lead a church, to flush out Mungiki adherents. One hundred people died in the clashes.

We carefully followed the safety advice of our Kenyan friends. But one evening, as we drove through the “safe” part of town at dusk, we witnessed a frightening sight beside a round-about. Men swarmed over a marooned car like flies, jumping on the roof, on the trunk, on the hood. We were afraid to stop. Was it a car-jacking unfolding before our very eyes?

Through it all, I felt increasing awe at my mother’s flexibility, fearlessness, and willingness to embrace all of the experience. Then again, she is the woman who hop-skipped and jumped across the world with my dad, four kids ages 1-13 in tow, to live in the outback of Australia, a country they had never even visited before.

After a few days in Kenya, we flew to Uganda to investigate adoptions there. We stayed at an orphan ministry guest house, sleeping in side-by-side bunk beds. Our hosts assured us it was quite safe for a woman to walk the streets of Kampala alone at midnight. We chose not to test their claims, but we felt the relief of Kampala after the insecurity of Nairobi. 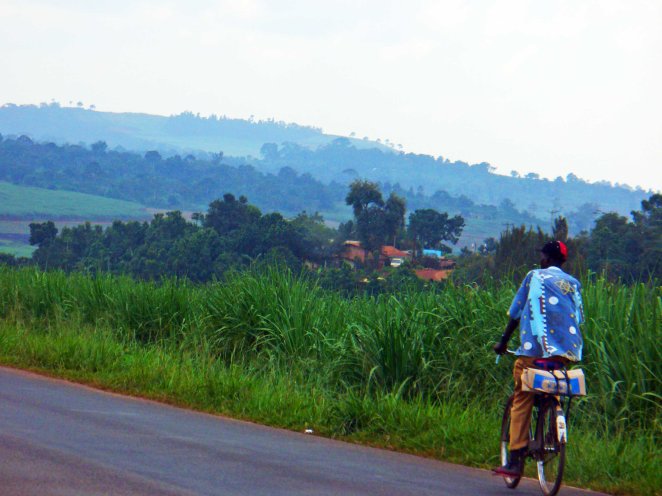 One morning a chicken arrived at the guest house, indignant to be carried upside down by its feet. The Ugandan cook tucked it into a kitchen cupboard, and it spent the day clucking in protest and clawing at the cabinet door. That night it felt no more pain as its parts occupied the center of the dinner table.  My mom cheerfully enjoyed her meal.

While I made cold-calls via phone and in-person to lawyers and government officials I’d never met in a country I was visiting for the first time, my mom cheered me on. 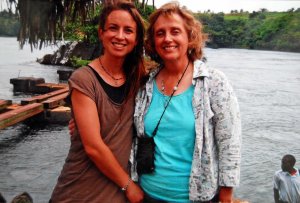 One day we visited an orphanage in the lovely town of Jinja.  There, we happened upon one of the Seven Natural Wonders of Africa. The Ugandan Nile River is one of two tributaries for the longest river in the world, flowing over 4,000 miles across ten countries to its mouth in Egypt.

It felt somehow significant to visit the source of a mighty, world-traversing, and history-changing body of water with my mother.

During my childhood, she was the calm and gentle water flowing steadily through sunflower meadows. Sometimes she was the sandy haven-depths, far below icy winter’s angry grasp. When it came time to launch me into the sea, she sang a second-birth song and blessed me with all her strength. Once my mother was the river surrounding me, now she is the powerful ebb and flow within my heart, currents of courage and inspiration.

During our trip to Kenya and Uganda, and always, she is the beautiful river who carries me.

8 thoughts on “A Beautiful River in Uganda”