For weeks I watched its stems and leaves unfurl from soil and climb into a lanky silhouette, stretching for sunrise. It seemed to be a flower of some sort, and I was curious for its culminating shape and color to emerge. But when it did, I was surprised. Wispy white tendrils burst from the center. Not a flower at all, but decidedly a weed.

Before it even lived, it seemed to wilt. It caught my attention just as it released its first seeds buoyed by a parachute filament. Soon after, violent thunderstorms swept through our area releasing hail and buckets of rain that turned streets into rivers. The fragile weed could not withstand nature’s onslaught. Its crowning glory, that wispy white head, bowed and gave way. Its stalks, now brown and broken, linger as the only testament that it ever reached for the sun.

Its ephemeral presence speaks to me of truth eternal. 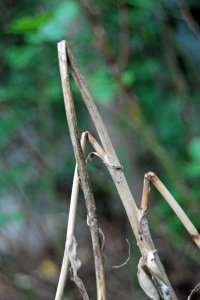 It grew, it became; it offered its seeds to the world. The winds, the rains destroyed it; even as they simultaneously carried its seeds and deposited them with nurturing moisture. Almost certainly next summer, long lanky stalks will push through soil in other parts of my yard and possibly my neighbors’. And, in fact, if I fail to root them out, they will probably take over.

I think of a line from one of my favorite poems, Let This Darkness Be a Bell Tower by Ranier Maria Rilke, “What batters you becomes your strength.”

If I could, like the weed, stop trying so hard and simply yield into what I am meant to be, I suspect I would find that through all of this living and dying the sacred center holds:  I belong to God, and it is enough.