We leave the aching hope of the Mother Teresa compound for the teeming chaos of streets beyond. Now joining us – me; my Pamba Toto co-founder, business partner and dear friend, Debbie Lee; and her husband Brian – in the car is John, with a smile to shove back the darkest night.

He directs us to a nondescript cement facade. John speaks to a man standing nearby, who nods. The car will be safe while we visit. We duck through a gate and pass through a narrow corridor into a courtyard. Laundry stretches for rays of light from a stingy gray sky. 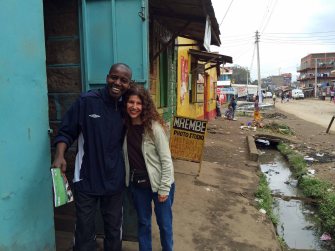 We cross over to a door which yawns miraculously into an artist’s studio. John lives, works, creates, and operates his business from this one-room space. At the moment, lively creations pile on a three tier bunk bed. Others clamor over one another, all the way to the ceiling. Somehow, buried here in the struggles of Huruma, lies nestled a fanciful wonderland. 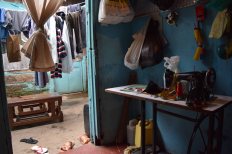 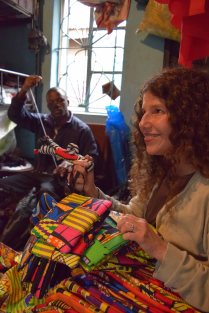 John tells us his story.

Many years ago, his mother, Emelda, fled Idi Amin’s horrific regime in Uganda carrying little more in her arms than John, then two years old. She escaped to Nairobi, where relatives worked. Like many refugees, Emelda and John were absorbed into a Nairobi slum. Then Emelda met a western missionary who gathered refugees from Uganda to discuss the Bible and teach them how to sew. John went along to classes, tied to his mother’s back in traditional African-style. After Emelda trained for several years, the missionary left Kenya; but first, she introduced her students to the Kenyan Masai Market so they could sell their hand-crafted items independently.

As they grew, John and his younger brother helped their mother. John possessed special talent. When he was still quite young, he trained and supervised younger cousins. Meanwhile, his mother, through sheer determination and with the help of government assistance for refugees, ensured that he graduated secondary school. Although he yearned to pursue higher education, John began working full-time to help support his three younger siblings.

Demand for Emelda’s and John’s hand-crafted products grew. They now employ John’s cousins, Jumai, age 19, and Kasim, age 22. John, age 34, supports his wife and two young children through the business. However, terrorist incidents in recent years, such as the horror of the Westgate Mall attacks, chew away at local markets. (You can read my personal reflections on two of these incidents by clicking here: Westgate Mall attack and Garissa attack.) 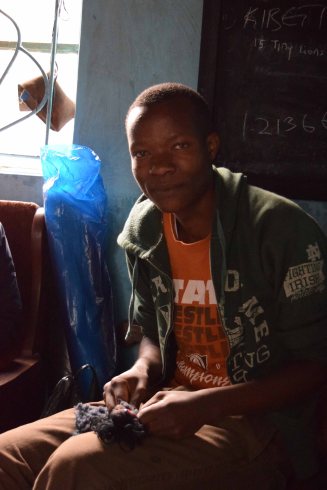 Just last year, John almost lost his younger sister to what seems to be a human trafficker. A man convinced John’s sister to pay him $500, promising her a job in Dubai airports. Debbie heard the story as it unfolded and warned John. She urged him to tell the man she would check on John’s sister when she passed through Dubai on lay-overs. The man disappeared. As we discuss the incident, I think of a good friend of mine who worked for International Justice Mission, freeing victims of human trafficking. John’s story bears a striking resemblance to many of hers, and my skin crawls with fear for what might have been.

We talk about product development for Pamba Toto. John possesses a rare ability to simply see an idea and create it. 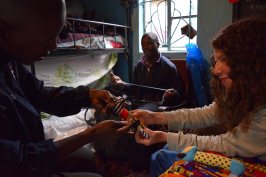 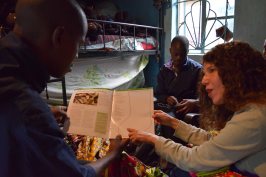 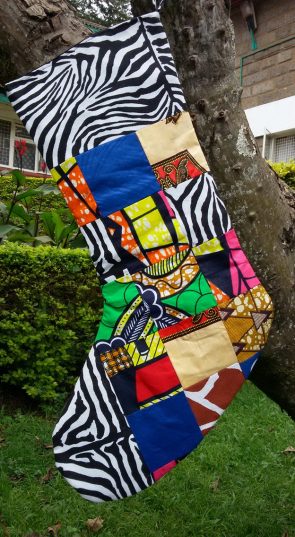 We leave John, smiling and waving. His small group of artisans called Mwangaza (Swahili for “bright light”), huddles with him, radiating talent, perseverance and courage – made all the more beautiful by the harshness surrounding them.

As we drive away, my bewilderment from a decade of experiences in Huruma fades for a moment, replaced with hope that there might be a chance for mercy. 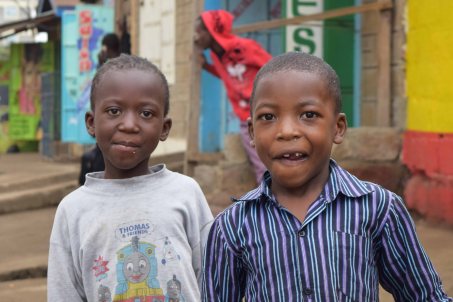