After three years of painting almost every day, I’m slowly finding a better flow in my work, feeling less desperate about killing every piece I start. I’ve developed a fuller body of work. I still have so far to go, areas where I just can’t translate the image I see in my heart onto paper, technical struggles and conceptual road blocks.

One of my greatest desires as an artist from the beginning remains true today: to communicate, to create a dialogue. If painting is simply about my own personal expression and gratification, I become bored and unmotivated. It’s the subtle dance of speaking through a brush and listening to the response of the viewer that unravels the story in my heart.

So in hopes of conversing with more people, I’ve been entering some shows lately.

On one hand, I’m getting some good laughs at myself. For a recent show, I sought my husband’s advice on which pieces to enter. I showed him a work called “Quelled”. He replied politely, “Um, maybe not that one.”

I asked him what he thought the painting was about. He finally admitted that he had no clue what it was or what it meant. I found my gaggle of kids. I let them know that under absolutely no penalty of death, I wanted them to honestly tell me what they thought it was. “A mountain,” “a mushroom” were the sheepish replies, posed as questions. I could not stop laughing. I intended it to be a bird.

It’s easy as an artist to become blind to our creation. To pull in so close that we can’t engage other perspectives. Which is a huge reason I long for the dialogue.

Entering shows is also a terrible emotional roller coaster. Getting a piece into a show is obviously affirming. But getting “rejected” – that is a nightmare. It’s the same old soundtrack every single time. The same old taunts and ridiculing thoughts. Yet again, I find myself telling God, “Ok, I give up. This is the end of the road. I have absolutely no talent. You will have to find something else for me to do.” It lasts a day to a week. And then I pick up the paintbrush again.

Recently I entered a statewide show. And I didn’t get in. I stopped painting for a week.

And then, a few days ago, I couldn’t resist the challenge to develop the piece further. Through the work, I am trying to express an idea that is deeper than words, too abstract to anchor in representational images. But I’m not at all sure if I am saying anything in a language someone else can understand?

Perhaps as the viewer, you hold the key to unlocking the next part of the story for me. Perhaps you are the one to call it a “mushroom” so I can laugh and move on to something else.

I’d love to hear your thoughts… 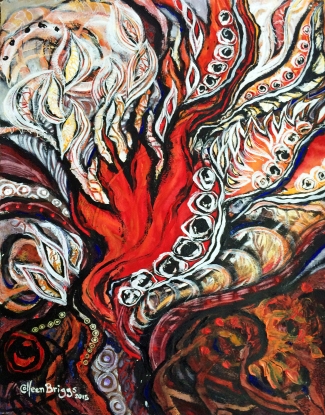