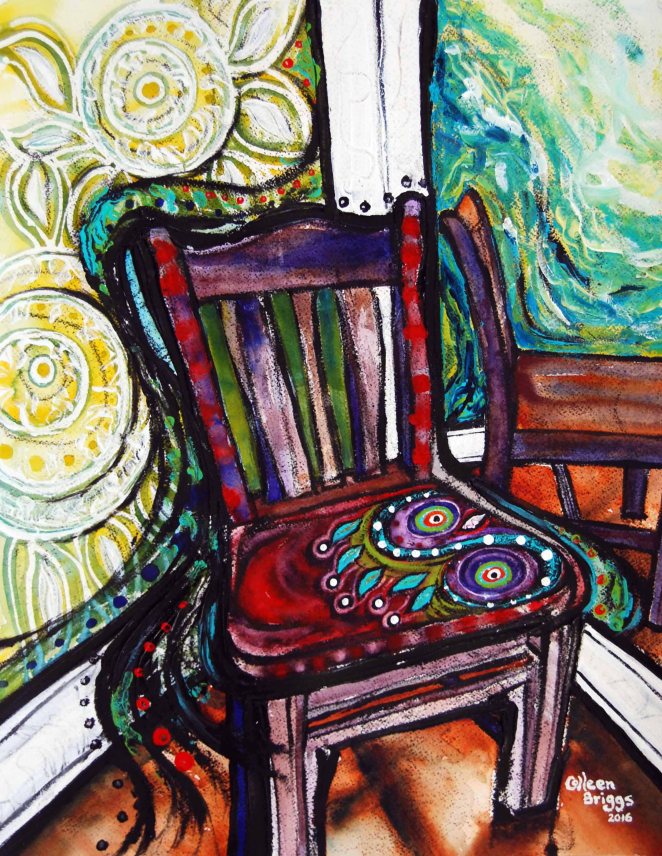 I suppose it isn’t surprising when I think about my Irish grandmother, Margaret (O’Laughlin) Ferguson, known to many as “Mickey.” Whenever I visited her home, brightly colored kitsch-art gnomes peered out from shelves scattered around her living room. Who knows but that they came to life at night and followed her bidding? Her eyes sparkled when she regaled me with stories about Irish “banshees”, and her accounts of a “spook light” buried somewhere deep at the end of a deserted road in Missouri set my imagination on fire.

But most of all, her laugh was magical, transporting. Whenever I think of her now, I see her eyes alight and her head tipped back, laughing at the magic of a moment. Two months before she died at age 84, in the exam room as she was diagnosed with terminal cancer, I told her that if she went first, I would simply say, “See you later Grandma.” She told me she’d be waiting for me. And then we laughed together.

At her funeral, I read a quote by one of my favorite authors, Henry Nouwen. It seemed as if he wrote it for her: “So often people grow resentful and bitter as they grow older. With time their image of an ideal life is disturbed because historical, political, personal, family, or financial realities break through… The great art is to gradually trust that life’s interruptions are in the places where you are being molded and formed into the person God calls you to be. You know you are living a grateful life when whatever happens is received as an invitation to deepen your heart, to strengthen your love, and to broaden your hope.” My Grandma embodied this daily choice.

With my formative years steeped in this kind of magic, it was just a few light steps across a magic footbridge to the land of miracles.

As a young girl, I loved nothing more than running around in the forest with my Dad. One day we frolicked in a meadow; and when we reached the other side, his pocket knife was gone. Immediately I suggested we pray. He secretly feared my young faith would be compromised by the needle-in-a-haystack situation, but we prayed. And we found it.

When I grew up, I trusted God for crazy things. Like instantaneous healing of my daughter as a Kenyan pastor prayed for her. Like a friend of a friend of a friend who called me out of the blue when I worked as Director of Orphan Care for Hope’s Promise and asked if his church could donate more than $100,000 to open an orphan home in Kenya.

Call it magic or miracles, I have no doubt the impossible can happen.

So, when I paint, I’m not particularly interested in the ordinary. Actually, that isn’t true – it’s the ordinary that fascinates me most, but I don’t see it as ordinary.

Take a chair, for example. For me, its value goes far beyond its utility. I start to think about what it would do if it came to life, if the energy bound up in its existence were to burst into color, if it started speaking about the person who crafted it, telling stories of people who move in and around it, most of the time unaware that all around them is “an invitation to deepen their heart, strengthen their love, and to broaden their hope.”

Magic intrigues me. I suppose that with a birth name like Colleen Ferguson, there’s more than a little of my Irish grandmother in me. I certainly hope so. 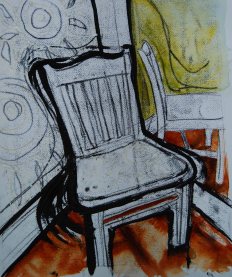 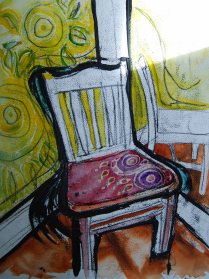 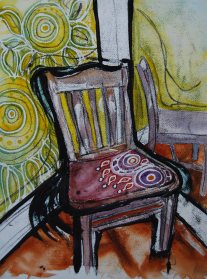 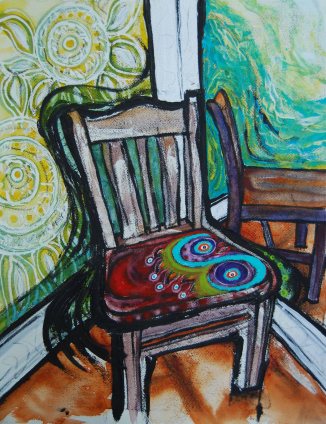 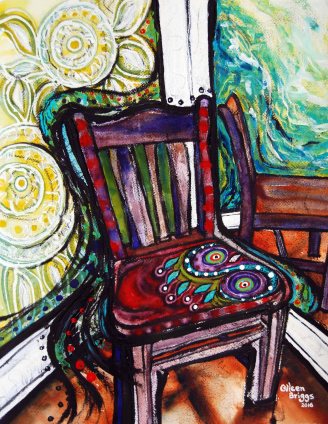 Progression of Chair #2 from base layer of oil-based ink, adding watercolor, then concluding with acrylic.