After returning home last week from co-leading the Hope’s Promise 2017 Connection Team to Kenya, I wrestle to process a mind-bending juxtaposition of past and present. The team stayed at a guest house in the community where I lived with my sons for five months while adopting my daughter in 2005….

If time could fold back on itself, I would meet her there in 2005, guiding a ragtag motley crew:  a toddler girl strapped to her back in a bright orange-and-black-patterned kanga, two preschool boys (one black and one white) running circles around her knees.

She ducks into a shop, shifts the fabric bundle to her hip, counts out coins. The littlest one fusses, while the rowdy “twins” poke curiously at items on shelves. The shop-keeper grins. She returns the smile, friendly but strained, as she greets, “Habari?”

She isn’t proud of it, but in a blatant symptom of “red-lining” (ie, rebellion while crossing cultures), she is wearing old jeans and a t-shirt. The women on the street just outside the shop parade in classy suits and high heels, picking their way over pocked-dirt surfaces. However, her own ankle-length skirts, the garments she wore at first, now hide, wadded up into dark pockets of her suitcase. If they are going to force me to stay, at least I will dress comfortably for chasing three children.

The boys settle expectantly on dusty steps as she opens the refrigerated case, selects three sodas, and inserts straws. Eagerly, they stretch out grubby, red-dirt smudged hands. She unties the kanga and deposits the littlest one next to the boys. They hardly notice matatus (public transportation vans) screeching to a stop, just meters away, people piling in and scrambling off. The intermittent hoots of trucks roaring by fail to register, blending into the cacophony of goats bleating, people hollering, dogs barking, birds cawing, schoolchildren laughing – the music of a day so ordinary. The flurry of coming and going hardly notices them, now just a common sight in the every day scurry. The town drunk passes by and calls out a greeting. She replies, “Sasa.” The children giggle, slurping their Fantas.

They deposit their empty glass bottles in the crate, and she hoists the kanga to her back once again. They round the corner to a ramshackle kiosk. A bead of sweat gathers in the small of her back, suddenly cooled by the shadowed interior. The red of tomatoes, orange of mangoes, and green of avocados emerges from dusky gloom. She filters lentils into a plastic bag, ties off the top.

And as time folds back onto itself, there I am, standing in the doorway of that fruit-and-vegetable stand in 2017. Twelve years later, I explore my old “home-town” with twenty-six other Americana. Strange how being absent claims the every-day-ness. What seemed so normal morphs back into the exotic, and senses once again sharpen to notice what was taken for granted.

With my mom at the Kasarani fruit-and-vegetable stand, 2005

One of those little boys, now almost a man, walks the streets again. He meets memories of himself scampering over ruts, sucking candy confidently in front of a butchery shop, naked slabs of meat hanging un-refrigerated, unashamed in the window behind him. He watches his five-year-old self stomping in the mud with his brother, sees his mother shaking her head as she purchases more Omo (Kenyan laundry soap). 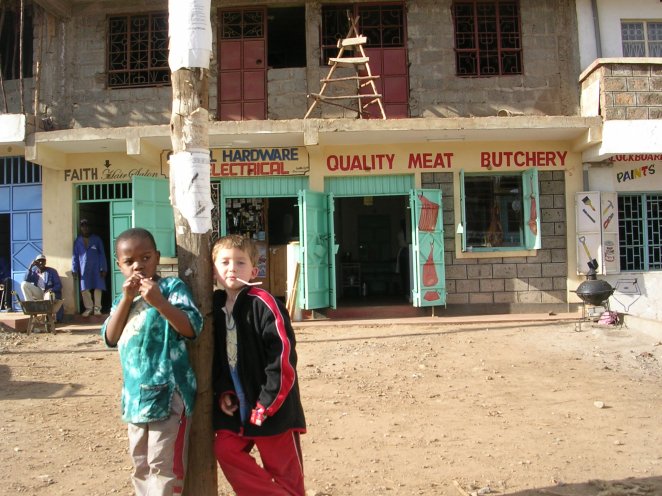 Justin, in black shirt, with friends in Kasarani, 2017

My son and I, we merge into those figures from the past, hovering just outside the people we are today – like the roots of a tree that are still part of the whole, but deeper and older. Who knew the roots were growing this? Each of the days so mundane, how we could we know they were layering rings, forming a sturdy trunk?

Now in 2017, Americans tromp through our old home, distracted and wondering at what became so ordinary to us. 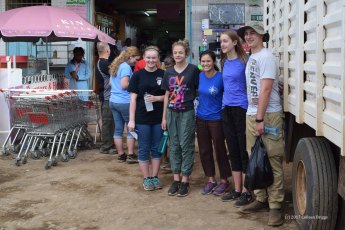 My boys with friends in Kasarani, 2005

And there they are now, Kenyan orphans sheltered in 2017 branches that sprouted quite unbeknownst to us, back when we were just that 2005 trunk, a ragtag mob of mama and children, eking out another day in Kenya.

I stand there watching as she disappears down the lane, back into time where she belongs, the orange-wrapped child fussing again. Those unruly boys splash through the puddles. I want to tell her what will come to pass, just to give her courage for that day; but the twelve-year fold proves impenetrable to my voice calling back through the years.

I glance down the road, gushing with vehicles, and there I imagine a familiar white car weaving over the ruts, a Kenyan pastor waving as he drives past. His expression is warm and knowing. 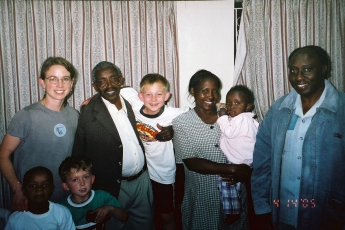 Me and my family with Pastor and Mama Karau, 2006

Our eyes alight in mutual recognition as the fire of the past burns into the present. 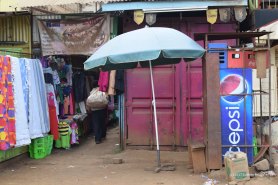 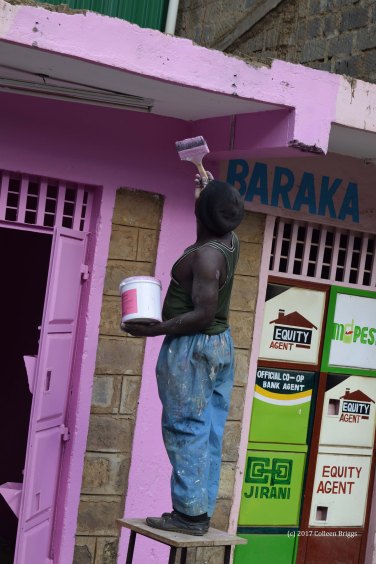 10 thoughts on “Meeting Myself There”