Another Day in Kenya – Chapter 18

“The Lord God helps me; therefore I have not been disgraced; therefore I know that I shall not be put to shame; he who vindicates me is near.” Isaiah 50:7

Only Mwenda and I step foot in the courthouse’s deserted hallways for our third and final court date on August 8. For a few days after the adoption hearing, after David returned to the US, we held our breath. In a final stroke of drama, it seemed there were no open spaces in the court calendar, and we would have to wait until after an extended month-long court recess for the verdict. But, in Mwenda’s way of working magic, here I am, on the final day before the break. As Mwenda disappears to conduct other legal business, I settle alone on a bench outside the judge’s chambers.

Only a week before, so many waited in this very place with me – my husband and four children, Mother Teresa sisters, Kenyan friends – a crowd gathered to share the anxiety and witness the climax of our third attempt to claim our daughter. So many had come and gone, sojourned with me sacrificially and generously. Their faces flit through my mind. But, here, on the culminating day of the epic adventure, it feels so strange to be alone in a quiet and vacant hallway. And yet, not alone. Never alone.

I settle on a bench, open my Bible, and sink into the ancient words of the Psalms, “This I know, that God is for me.” Psalm 56:9. The roots of my soul grip bedrock peace and assurance.

Mwenda returns. We are called into the judge’s room. I walk in, trembling. We sit across from her desk, facing her. The judge reads aloud from a document. She intones words that reverberate through my emotions, through my soul. My name, my husband’s name, our daughter’s name.

And then she reads, “It is hereby ordered that the applicants be authorized to adopt the infant Lily and the said child be known as Lily Azizi Briggs…”

The words wash over me in waves of disbelief, relief, joy, wonder. It’s like my mind can’t process the meaning of the words, even as my heart reacts. It’s like I’m standing behind a pane of glass, watching myself, an out-of-body experience. I see the judge, Mwenda, and myself – tense and taut on the edge of my seat. Without pausing, the judge continues reading the short remainder of the legal verbiage. As she concludes her monotone verdict, I merge back into myself, and quiet tears stream down my face.

The judge scrawls her signature. With a stroke of a pen, a child’s identity officially transfers from “abandoned” to “claimed.”

In a movie, there would be a soaring musical score, a wild party, fireworks. But instead, Mwenda and I simply step out of the room side-by-side in sacred silence, like warriors too overcome by the cost of the victory and the resulting joy to even speak.

Was the greatest miracle the adoption finally granted, or was it the journey of my own heart? Though I pleaded time and again for external miracles, actions that God was surely more than capable of, time after time He answered with the opposite. As external storms battered my soul, God called me deeper and deeper, beyond what can be shaken. He tenderly led me deep into the unrelenting goodness of what He has always known to be true, that I am His. I am claimed. And that is enough.

The party came later. I returned to my mother-in-law, who stayed with our four children during the hearing. We invited our friends, the Karaus, over and raised a ruckus with cake and party supplies. As texts, emails, and phone calls spread like wildfire around the world, I’m sure the shouts of exultation reverberated to the high heavens. 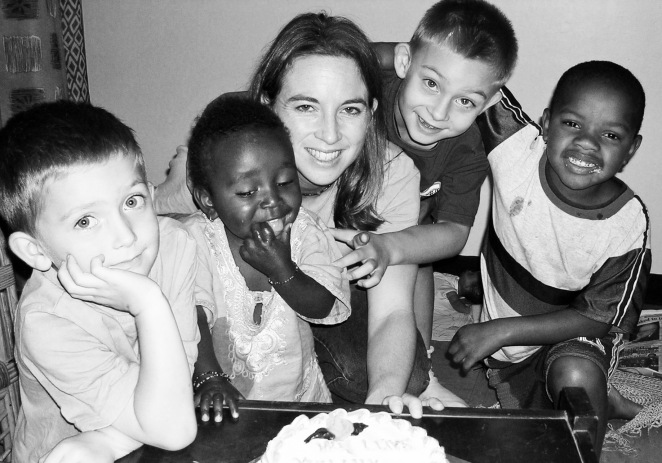 Our dear friends Purity and Mama Karau with Lily

Our dear friend Benson with the boys

When a long and arduous battle finally culminates in victory, but you are wilted and weary from the exertion, kindness flows over a dry and weary soul like a crescendo of waterfalls flashing in mid-day sun.

I know, because someone extended this kindness to me. 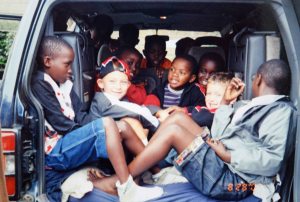 Nine children and six adults clamored into Mwenda’s SUV. My three boys, exhilarated by this flagrant deviation from American safety norms, piled in the back with five other kids. We cruised beyond the urban clutter of Nairobi into expansive savanna. Acacia trees nodded benevolently in the wind, rolling hills promised something delightful around the next corner.

Hours slipped under the wheels, carrying us far away from the battle scene. During the previous six-and-a-half-months, transportation was extremely expensive, so we confined our travel to only what was necessary for our daughter’s adoption process. It felt utterly extravagant to cruise the open road for pure pleasure.

We pulled into a red dirt parking lot, fringed by dusty green trees. Kids eagerly unfolded crushed limbs and stretched out, chasing a basketball around the vehicle. Adults unpacked sacks of snacks and spread a blanket to soak up sun.

Then we gathered and scrambled down a trail. Earthy scent of soil and leaves drifted in the breeze. The source of a persistent roar came into view as we rounded a bend. Glistening water thundered over a drop-off, crashing in multiple waterfalls over rocks below.

Winding down the path to the river below the falls, we stepped into a wobbly blue wooden boat. It hovered, about a foot rising above the surface, as a guide balanced on one edge. Hand-over-hand he clutched a rope stretched taut from one shore to the other and guided our vessel across lazy currents as one of the women led us in a hearty rendition of “Row, row, row your boat.”

On the other side, the gaggle of kids clamored over a jungle gym of boulders and trees. Soon a few men appeared and whisked the kids away. Mwenda reassured me they were guides who would help the kids climb safely. I reveled in the beauty of rock formations, crescendo of dancing water, air alive with the smell of growing things. I was grateful my boys were off stretching their legs, stretching their souls.

When next I caught sight of them, my eight-year-old son’s scrawny legs hung over the edge of a 20 foot cliff! Jacob clung to roots cascading down the surface from a tree sprouting from the cliff face. Two barefoot Kenyans wedged into cracks in the rock and supported his downward progress. I breathed a sigh of relief when my son touched solid ground below, then glanced up at the top of the cliff only to glimpse one of my five-year-olds slithering over the top! Once the boys arrived safe and sound with me, we laughed at the thrill of their adventure.

When it was all said and done and the case was finally decided in our favor, Mwenda deserved to rest on the accolades. He fought hard, worked tirelessly behind the scenes, and did whatever it took to win the case, even when it meant personal sacrifice, like driving eight hours round-trip to make sure a document was signed. Instead of congratulating himself and resting on his laurels, Mwenda carried kindness to another level. He invited me and my four young children to join his family as guests for a day-long excursion to Fourteen Falls. But, then, kindness was Mwenda’s mode of operation. From the beginning, he took my case personally. For him it wasn’t a legal process he was hired to complete, a job to be done. His heart was truly for the orphan and the justice of our case – a child receiving the family she deserves. I will never forget the day a Kenyan social worker came to conduct an interview for the case. Of course, I was dreadfully nervous. Completely unasked, Mwenda loaded my five-year-old “twins” into his car and hustled off them off to a nearby store, buying them candy and keeping them entertained, so I could concentrate.

After playing on the boulders, we hiked to the top of the falls. Holding hands in a long line, we snaked with guides around gnarled tree roots clutching the lazy water’s edge and across slippery rocks and islands of vegetation, making our way for at least an hour across the wide, shallow river. My kids were just kids, laughing and carefree, splashing water at me. Perhaps they hardly recognized me as the burdens of the previous month – the tears, the constant adrenaline, the red-tape nightmare hang-over – fell away like so many droplets of water shimmering in the sunlight. I, too, laughed and splashed them right back. Mwenda took us out to dinner with his family on the way home, and refused to allow me to pay for my family.

I am a “rugged individualist.” I was born and raised not only in the USA, but in the countryside of Colorado, in the wild-west where independence and self-sufficiency are worshiped cultural ideals. Sometimes it takes actually being the foreigner, the broken and vulnerable, to truly understand those who are so close to the heart of God and why He calls us to love them in His Name. Even as Mwenda loved me and my children.

Like water in a desert, kindness traces rivulets in the heart where, years later, streams of life-giving gratitude still flow.