Another Day in Kenya – Chapter 2

Another Day in Kenya – Chapter 2
When Are You Coming to Kenya?

Usually when parents decide to adopt, they locate an adoption agency in their home country and then a social worker helps them narrow down age, gender, and nationality of the child they hope to adopt. We did it all backwards. We found our son, and then we searched for an agency and started figuring out how to bring him home. Since there were no existing “adoption programs” of Kenyan and US agencies working together, we learned we would need to complete an “independent adoption.” Our US adoption agency would guide us through state and national requirements, but we would need to hire a Kenyan lawyer and work directly with him or her to navigate Kenyan legalities.

Nevertheless, as far as the timing of international adoptions go, we were flying a turbo jet.

On Sept 30, 2000, we learned of our son’s existence. We decided to adopt him in late October. In early November, we wrote our letter of intent to the Sister Superior of the Mother Teresa orphanage and initiated state and US legal procedures with Hope’s Promise, an adoption agency in Castle Rock, CO. We located a Kenyan lawyer through my friend Julie’s mom, Sue Anne, who was living in Nairobi again and volunteered regularly at the orphanage.

We learned more about our son.  The Mother Teresa sisters told Sue Anne that not only did our son survive a traumatic birth on March 25, 2000, but battled a near fatal illness as a four month old. Sue Anne wrote me, “When (the sister) took him to the hospital for his tuberculosis, no one, including the doctors, thought he could live. He weighed only 4.4 lbs. Now (as an 8 month old), he weighs 15.4 lbs. She took him back for a check-up not too long ago and everyone there was totally amazed it was the same child. They called him a miracle.”

In late November, we sent a family photo to Sue Anne, who replied by email, “I showed Josephat (our son’s name in the orphanage) the picture. He REALLY looked at it and focused from one person to the next. I kept pointing out Mama and Dada. And truly, as he looked at it, he got all excited and started kicking his legs and trying to reach out to grab the picture. It was cute.”

And in late December, we received an amazing gift in return – video footage of our son in the orphanage, taken by Julie’s parents. When the camera focused on Jedd, seven-month-old Justin, six weeks younger than Jedd, responded in much the same way as Sue Anne described Jedd’s reaction to our photo. His little legs and arms flailed and he babbled excitedly. Tears streamed down our faces. It seemed from the oldest to the youngest, spread halfway across the globe, we knew we were meant to be together.

Just a little over four months after learning of our son’s existence, in mid-January 2001, we expected to fly to Kenya any day. With all the state, national, and international paperwork in order, we were simply waiting for our Kenyan lawyer to notify us to come for the adoption court hearing.

Jedd Josephat, a photo we received in January, 2001. 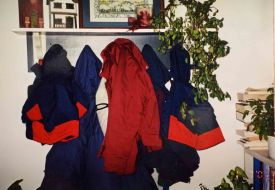 Jedd’s crib waited next to Justin’s in mid-January.

And then our turbo jet engine stalled. For weeks, our hearts raced every morning as David headed to work, eager to check the fax machine for a message from the lawyer. Every morning he called to report, no news. During a particularly challenging day, as I fought through a feverish illness, I wrestled with terrible anxiety that the lawyer was not communicating with us because our son had died.

In mid-February, our turbo jet plummeted from the sky into a dark, turbulent sea.

On February 16, with no warning whatsoever, my extremely healthy father, aged 54-years-old, suffered a massive stroke. I rushed to the hospital, only to find him in the ER yoked to machines and sprouting tubes. Keeping him alive was the only goal in the immediate aftermath. That night, as I sat alone with him in the Intensive Care Unit, listening to the hum of medical devices, he began to speak nonsensical sentences. My heart dropped to my feet. I quickly located a nurse. Medical personnel rushed to his room. His brain was swelling. We were not allowed to be with him as they instigated life-saving procedures. I fled to the hospital chapel and surrendered to God. This beloved man – my friend, my mentor, my hero – he belonged to the Lord. I knew he was fully and completely at peace and ready to meet His Maker. I wept bitterly as I gave him back emotionally and spiritually to our God.

Somehow, he survived the night.

The next day, February 17, we received an email from Tim, Julie’s father in Kenya, reporting frightening news about Josephat. Earlier in the week, the sisters took him to the hospital to check for damage to his heart from the tuberculosis. The sisters said he was “fine;” but on the day of Tim’s visit, he was lethargic and feverish. The sisters also told Tim that our adoption case was held up in the system as new judges were deciding how to interpret adoption laws. They might even require us to live in Kenya for three months before we would be allowed to adopt Josephat.

By Monday, Feb 19, my father was somehow still alive, although he remained on an air ventilator, pumping oxygen into his brain to reduce swelling. It would be another full week before we felt confident that he would survive. We didn’t know yet the extent of the damage, but we knew it was life-changing. We knew he most likely would never return to his job as an electrical engineer and would suffer permanent physical disabilities.

I wrote in an email to a dear friend on that Monday, “…although my emotions are agony about being away from Jedd and especially knowing he is sick, I thank God that He has plainly said I need to focus here now; and He has not put me in the horrible place of having to decide whether to be here or there. I trust that He is so very good and that He is working all of this for our good. Since He has said I cannot go get Jedd now, I know that means He is taking care of him. We will wait to hear if the judges will change their minds or if there will be a way for me and the kids to live in Kenya for three months, although I don’t know what that will look like with my dad so sick… I guess for now I will simply trust God. Now I know why He would not let us go. We will do whatever it takes to get Jedd home when God says it is time.”

Day by day, we slogged through the valley of the shadow of death.

And then, two weeks after my dad’s stroke, my beloved Grandma, my dad’s mom, was diagnosed with terminal cancer. My dad remained in the hospital and in no condition for us to even tell him about her diagnosis. I took a leave of absence from my job as a college campus minister with InterVarsity Christian Fellowship, and divided my time between my dad in the hospital, doctors’ appointments with my Grandma, and taking care of my two small children. Through it all, I ached miserably for the son I could not hold.

I often stole away to the hospital chapel to pray when the intensity of longing overwhelmed me. Alone in the quiet, where I didn’t need to be strong for anyone, I could lay my heart prostrate before the Lord. During one of those visits, I felt Him nudging me to look at a sculpture of a man holding the Christ Child. “Even so,” I heard Him whisper to my heart, “I am holding your son.”

Throughout these months, enduring continuing silence from our lawyer despite multiple pleas for updates, we fought for Jedd in the only ways we knew how. We prayed and enlisted friends and family to pray, emailed Julie’s parents in Kenya constantly, and we even contacted the American Embassy in Kenya. For whatever reason, our Kenyan lawyer remained unresponsive; but through these connections, we learned in late March the Kenyan government would not require us to live in Kenya for three months, and preliminary court hearings towards our adoption were proceeding. 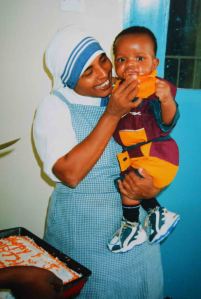 We were devastated not be able to celebrate Jedd’s first birthday with him on March 25. At our request, friends in Kenya took a birthday cake to him at the orphanage. I wrote a letter to him to help me get through that day, “My dearest little Jedd, how our thoughts and hearts are full of you today. As we fell asleep, you were waking there – starting your first birthday. There are no words to describe the longing we feel to hold you. We never doubted that you would be here by now, sleeping in your own crib tonight. All day we have fasted and prayed, pleading with Jesus to let you come and be with us. Someday, years of treasured memories will eclipse the pain we feel today… All our love flows across the miles to you, our beloved little Jedd Josephat.”

On April 6, my dad finally emerged from the hospital. Although permanently disabled, doctors called him a “miracle,” too. At last, we shared with him the terrible news about his mother.

Simultaneously, once again, we expected word from our Kenyan lawyer any day, inviting us to attend the adoption hearing for our son. But, I felt the Lord tenderly telling me that the reason every attempt at communication with our lawyer in Kenya was thwarted in some way was that we were not to go yet, that my Grandma would die before we left. She declined rapidly. I stayed with her constantly during the last week of her life in home-hospice care. I claimed the sacred honor, along with my parents and aunt, of walking her straight up to Jesus and slipping her hand from ours into His.

Just a little over two weeks after my dad left the hospital, we held her memorial service on April 24.

On April 25, 2001, the day after we buried my grandma, we received a fax from our Kenyan lawyer, her first communication to us since January:  “We got the adoption order on April 19, 2001 and baby Josephat is now legally yours… When are you coming to Kenya?”

4 thoughts on “Another Day in Kenya – Chapter 2”