Progression of a piece – Songs in the Dark

There is an idyllic perception of the artist, wiling away hours in beauty and serenity. Paint streams from garden paths of the mind. Birds sing, sun shines – effortless flow.

Perhaps this is the experience of some creatives. It is not a familiar space to me. Almost every piece I begin thrusts me onto a precipice of death and, sometimes, resurrection.

Songs in the Dark forced me there, perhaps a little less frightening now that I know to expect it, and as I lean on past experiences of pressing through. But still terribly vulnerable.

The piece began as collaboration, a response to a musical compilation. My dear friend, Shana Puckett, strung together a series of songs by various artists. Each composition speaks to a twist on the journey of singing in the dark (I am retaining the true title of the concept until she is ready to release it publicly). To me, it is a lyrical expression of Isaiah 50:10, “Who among you fears the Lord and obeys the voice of his servant, who walks in darkness and has no light, yet trusts in the name of the Lord and relies upon his God?” I connected with several of the songs immediately, and others steadily probed layers of my being. I began to paint.

Art is the language of the soul, and many non-verbal thoughts and feelings tumbled through my spirit as I painted. A few that can catch letters and form into words – exchange of light and dark, dark and light within and without, an energy source from outside yet it resonates with what is deep within, offering the very core essence and finding it received and transforming into something it could never be if it were kept, dying in order to give the offering that will bring life…

Unfortunately, though, what emerged on my paper felt stale to me and removed from these agitations of the soul.

Songs in the Dark, in process 1

I added color and vigor. The piece faltered, withering into darkness.

Songs in the Dark, in process 2

I vacillated on the cliff of uncertainty – was it living or dying?

I sorely wanted to relieve it of its misery and tear it into pieces, but I forced myself to let the painting rest. Those moments when a work is about to die wrack me with doubt. It is never just about that one piece. I wonder whether I am capable of creating anything of worth, ever again.

Then I began to scrub and rub and erase, re-claiming dark areas, wrestling light back in.

Songs in the Dark, in process 3

I discovered that the white areas were far more interesting than bare paper, retaining bits of color and texture and depth from the process, far more meaningful than unchallenged, untested white. This revelation resonated with my own experience of walking in darkness, calling out to the only One who can give Light.

I’m still not sure if I captured the image I see in my soul. I may try again. Who knows, after Shana and I evaluate the work’s connection (or lack thereof) to the song compilation, I may yet rip it up and make into something new. But even that awkwardness speaks to this journey of singing in the dark.

We never know exactly where we are, only the One to whom we sing. 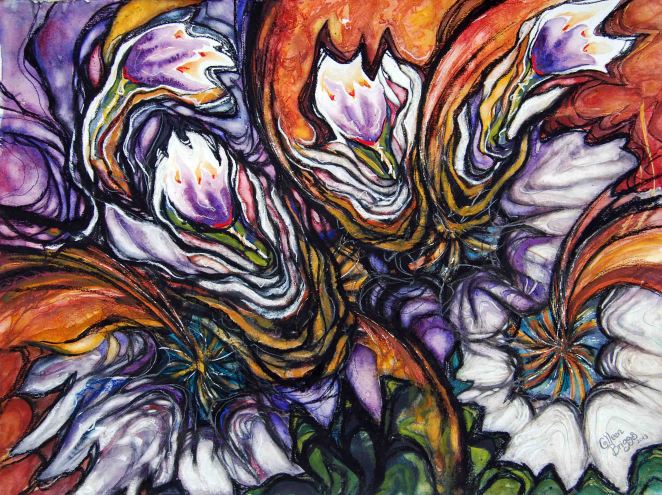 2 thoughts on “Progression of a piece – Songs in the Dark”